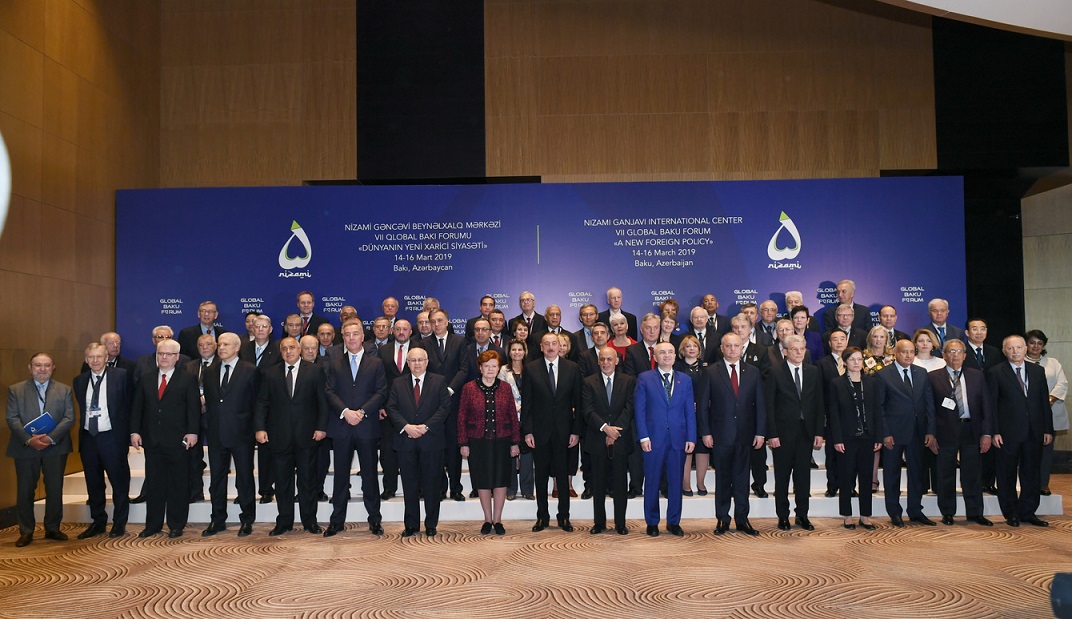 Five sitting presidents, including those from Afghanistan, Albania, Bosnia and Herzegovina, Moldova, and Montenegro; one prime minister, two deputy prime ministers, and 42 former heads of state and government were among the participants of the 7th Global Baku Forum in Baku on March 14-16 / President.Az

In the context of tense geopolitics between Russia and the United States, a Syrian civil war entering a ninth year, and trade wars, Azerbaijan played host to foreign policy experts, businessmen and diplomats at this year’s Global Baku Forum.

The three-day forum in Baku that took place from March 14-16 under the theme of “New Foreign Policy of the World” saw 550 delegates from 55 countries exchange views on policy trends and look for ways to build new mechanisms for dialogue and understanding that could help shape international diplomacy.

“Baku Global Forum today is one of the most important international platforms to address important issues on global agenda, urgent issues,” Azerbaijan’s President Ilham Aliyev said in his speech at the forum on March 14, according to the president’s official website.

Five sitting presidents, including those from Afghanistan, Albania, Bosnia and Herzegovina, Moldova, and Montenegro; one prime minister, two deputy prime ministers, and 42 former heads of state and government were represented at the gathering in the Caspian coastal city. Politicians as well as representatives from civil society, journalists, scientists and young leaders attended the forum, which was organized by the Nizami Ganjavi International Center, named in honor of the legendary Azerbaijani poet who lived in the 12th century in the city of Ganja, located in northwestern Azerbaijan, and whose poems had a great influence on the literature and culture of the people living in Caucasus, Middle East and South Asia regions throughout centuries.

Participants were encouraged to discuss tough issues and policy trends through 10 separate sessions, which included the role of the big powers in changing global policy, calls for sustainable development, Eastern partnership for security, and the role of science and culture in modern decision-making.

“As for the situation in the Middle East, this region was often subjected to serious upheavals, particularly in the past decade,” former Turkish Foreign Minister Hikmet Cetin said while speaking about a region that has been plagued by Islamic State militants, a civil war in Syria, and a geopolitical shake-up since the Arab Spring broke out in March 2011.

“They occurred with the participation of the major world powers. The level of security in the region seriously decreased due to terror. In parallel, I would note the presence of a factor of military and political intervention,” Cetin said, according to Trend.

No discussion about the problems in the Middle East is complete without raising the Israeli-Palestinian conflict. Israel’s former Foreign Minister Tzipi Livni said a resolution to the conflict can be achieved with a compromise peace deal that will work for both sides, adding that sustainable peace in the region and throughout the world cannot be possible without settling one of the longest modern-day conflicts.