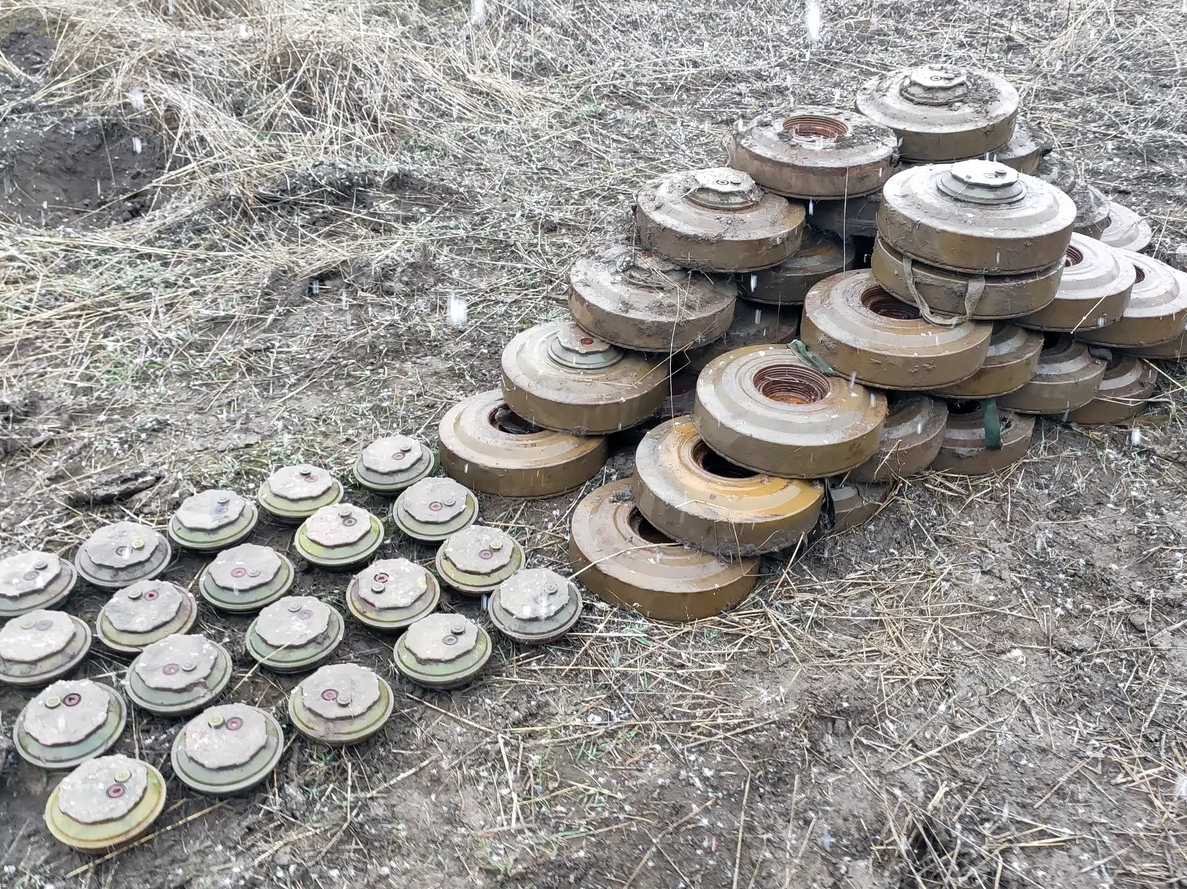 Landmines that were discovered during a clearing exercise in the liberated Aghdam district of Azerbaijan, January, 2021 / Russian Emergency Situations Ministry

Fifty-five thousand landmines and unexploded ordnances have been found and neutralized in Azerbaijan’s territories liberated from Armenian occupation since the end of the Second Karabakh War in 2020.

According to Daily Sabah, a total of 29,000 anti-personnel and anti-tank mines, as well as 26,000 unexploded ordnances have been defused a year and a half after the launch of search and neutralization operations.

The Karabakh and East Zangezur regions of Azerbaijan were heavily mined during the nearly 30-year illegal Armenian occupation since the early 1990s. Armenia launched a full-blown military assault against Azerbaijan following the Soviet Union’s dissolution in 1991. The bloody war lasted until a ceasefire was reached in 1994 which saw Armenia occupying 20 percent of Azerbaijan’s internationally-recognized territories. Over 30,000 Azerbaijanis were killed, and 1 million were expelled from those lands in a brutal ethnic cleansing campaign carried out by Armenia.

On September 27, 2020, the decades-old conflict between the two countries reignited after Armenia's forces deployed in occupied Azerbaijani lands shelled military positions and civilian settlements of Azerbaijan. During the counter-attack operations that lasted 44 days, Azerbaijani forces liberated over 300 settlements, including the cities of Jabrayil, Fuzuli, Zangilan, Gubadli, and Shusha, from nearly 30-year-long illegal Armenian occupation. The war ended in a tripartite statement signed on November 10, 2020, by Armenia, Azerbaijan, and Russia. Under the statement, Armenia also returned the occupied Aghdam, Kalbajar, and Lachin districts to Azerbaijan.

Since the end of hostilities, the Azerbaijani government has carried out demining operations in the liberated territories in order to expedite the return of internally displaced people to their homes.

ANAMA’s mine disposal teams, joined by specialists from the Ministry of Emergency Situations, the Border Services Command, and the Turkish Armed Forces, have been conducting demining operations in liberated Azerbaijani lands since the end of the war. The agency deploys cutting-edge machinery of Turkish, British, Slovak, and Croatian production. France is also expected to supply demining equipment to ANAMA.

Meanwhile, several foreign countries and organizations, including the United Kingdom, European Union, and UNESCO, have financially supported the mine clearance operations. The US-based Marshall Legacy Institute provided 20 specially-trained landmine detection dogs to ANAMA and is expected to dispatch five more in June.

Additionally, specialists from the British non-governmental Mine Advisory Group (MAG) have been training 20 employees of ANAMA in the Horadiz settlement of the liberated Fuzuli — one of the districts carpeted by Armenian landmines.

Despite extensive efforts, demining operations have faced many challenges due to Armenia’s refusal to hand over maps of the areas where the landmines are located.

More than 200 Azerbaijanis have been killed or injured by Armenian landmines since the 10 November 2020 statement. In June 2021, two journalists and a government official lost their lives in a mine blast in the Kalbajar district.

Azerbaijan obtained from Armenia the minefield maps of the once occupied Aghdam, Fuzuli, and Zangilan districts, which reportedly identify the coordinates of a total of 189,000 anti-tank and anti-personnel mines. Armenia has recently provided the Azerbaijani side with mine maps of other liberated territories of Azerbaijan. In exchange for maps, Azerbaijan released dozens of Armenian saboteurs detained in Azerbaijani territory after the ceasefire. However, Azerbaijan’s President Ilham Aliyev said the accuracy of these maps did not exceed 25 percent. Officials in Baku are convinced that the maps hidden by Armenia could help neutralize at least one million landmines planted in the once-occupied Azerbaijani lands.

ANAMA officials noted that the neutralization of unexploded ammunition, warheads, and missiles in the combat zones under current circumstances could take five to six years, while it is about 10-13 years for the mined areas.