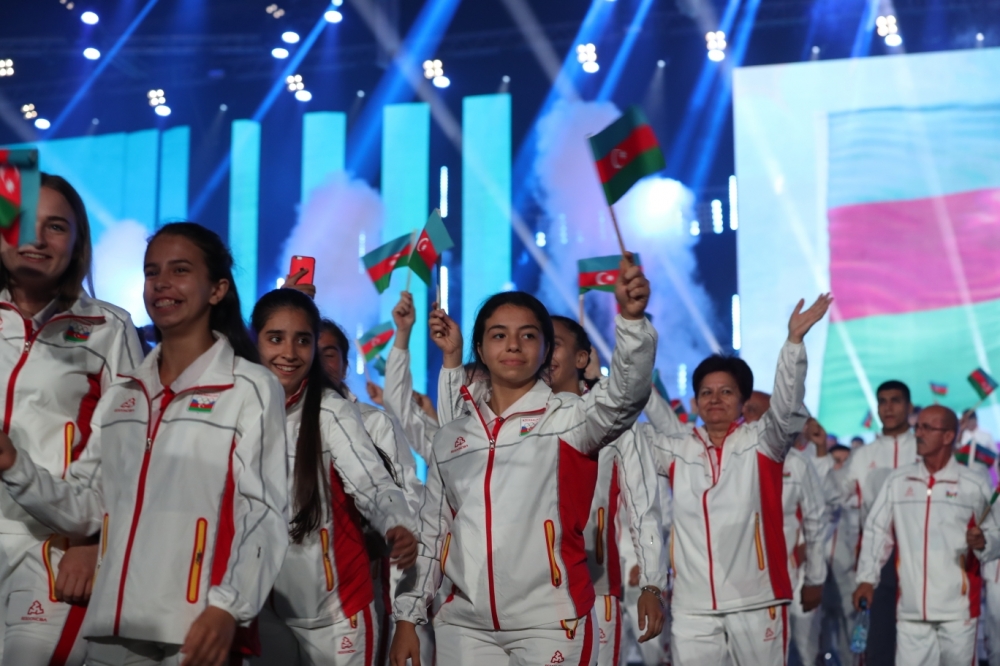 Members of Azerbaijan's national team at the grand opening of the European Youth Olympics Festival that took place at the Crystal Hall on Sunday. / Azertag

Young athletes from European countries arrived in Baku this week for the 2019 European Youth Olympics Festival, the first of its kind in the Caspian region.

On Sunday, Azerbaijan’s capital city welcomed more than 3,000 young athletes from 48 countries across Europe and the wider region, including Russia, Turkey and Israel. This year’s festival, which is considered the largest multi-sport athletic event for youth in Europe, is taking place at 12 venues, while the grand opening took place at the Crystal Hall.

What is the fifteenth edition of the European Youth Olympics Festival is the third major sporting event held by Azerbaijan in the last three months. Earlier this year, the South Caucasus country hosted Formula 1 Grand Prix races and the 2019 Europa League final football (soccer) game between the two British teams Arsenal and Chelsea.

Baku was selected for the festival as a back-up to Minsk, Belarus, after the city had withdrawn its bid in 2017 to prepare for the European Games.

The executive board of the European Olympic Committees (EOC), which co-organized the event, cited the unprecedented successes Azerbaijan had achieved.

“We have no doubts about your organizational skills and attachment to this realm,” EOC President Janez Kocijančič said on July 21 in his opening remarks, according to the official website of President Ilham Aliyev, who also was among the attendees of the event.

Athletes ranging in age from 14 to 18 are competing for 298 medals in wrestling, tennis, basketball, handball, swimming, volleyball, cycling, athletics, artistic gymnastics and judo. Wrestling is featured in this year’s games for the first time ever.

As of Tuesday morning, Azerbaijan was leading in the medal count, with 10 overall, and Russia trailing behind with nine. Azerbaijani wrestlers have won two gold, one silver and one bronze, while athletes from Russia brought their country four bronze medals.

The festival is a biennial multi-sport event for youth athletes from the member countries of the association of European Olympic Committees. The festival has a summer edition, held for the first time in Brussels in 1991, and a winter edition, which began two years later in Aosta.

Next summer festival will be held in 2021 in Banská Bystrica, Slovakia, between July 24 and August 1. Slovakian city of Košice was originally chosen to be host city but had withdrawn from the hosting due to financial concerns.

The 2019 European Youth Summer Olympic Festival in Baku wraps up on Saturday, July 27.