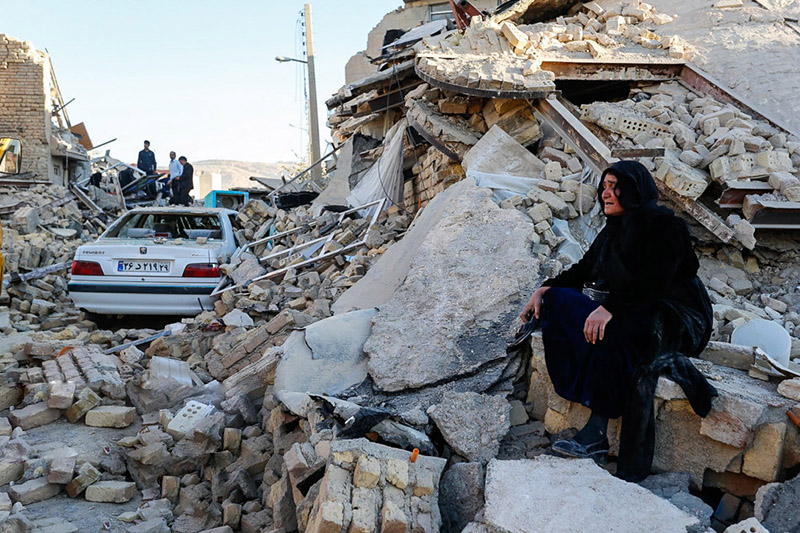 An earthquake with a magnitude of 6.4 shook Kermanshah province in western Iran on the evening of November 25, injuring over 700. / IRNA news agency

The number of injured in the 6.3 magnitude earthquake that struck western Iran at 1637 GMT on November 26, 17 kilometers west of the city of Sarpol-e-Zahab in Kermanshah province, has risen to 771. No fatalities have been reported.

“The number of people injured from the earthquake reached 771, according to the latest statistics obtained till Monday,” the head of the Health Sciences University in Kermanshah, Mohammad Reza Moradi, told Islamic Republic News Agency.

The quake triggered landslides in some areas, and it was felt in at least seven provinces of Iran. According to the European-Mediterranean Seismological Center, the tremors were felt in Iraq and Kuwait as well. Iraqi media reported that the earthquake left one person dead and 43 more injured in Iraq.

Many in Iran sustained injuries while trying to run away in fear of the strong quake, and 33 are still hospitalized. The deputy of operations at the Red Crescent Relief and Rescue Organization, Shahin Fathi, said that 87 operation assessment teams are present in the quake-hit areas, and 150 villages have so far been assessed.

In a phone call, Iranian President Hassan Rouhani instructed Governor-General of Kermanshah Province, Houshang Bazyar, to mobilize all facilities in the province to address the situation and accelerate the relief process delivered to the injured.

Another earthquake shook the province of Kermanshah on November 27. According to the information obtained by BasNews, the quake measured at 4.3 on the Richter scale. The quake’s center is said to be around Qasr-e Shirin, and no reports of casualties or serious damages have been reported thus far.

Iran is crisscrossed with fault lines and is regularly hit by earthquakes, experiencing at least one slight tremor every day on average.

At least 300 people in three provinces of Iran – Kermanshah, Kerman and Hormozgan – were injured during a series of earthquakes that hit the country between July 22 and 23 of this year.

In November 2017, a 7.3 magnitude earthquake hit villages and towns in Kermanshah, killing at least 620 people and injuring over 12,000. In December 2003, a 6.6 magnitude quake hit Bam, located in southeastern Kerman province, killing 31,000 people – about a quarter of its population – and leveling many ancient archaeological sites.